What is motion blur?

Motion pictures are made up of a series of still images displayed in quick succession. These images are captured by briefly opening a shutter to expose a piece of film/electronic sensor to light (via a lens system), then closing the shutter and advancing the film/saving the data. Motion blur occurs when an object in the scene (or the camera itself) moves while the shutter is open during the exposure, causing the resulting image to streak along the direction of motion. It is an artifact which the image-viewing populous has grown so used to that its absence is conspicuous; adding it to a simulated image enhances the realism to a large degree.

Later we'll look at a screen space technique for simulating motion blur caused only by movement of the camera. Approaches to object motion blur are a little more complicated and worth a separate tutorial. First, though, let's examine a 'perfect' (full camera and object motion blur) solution which is very simple but not really efficient enough for realtime use.

This is a naive approach which has the benefit of producing completely realistic full motion blur, incorporating both the camera movement and movement of the objects in the scene relative to the camera. The technique works like this: for each frame, render the scene multiple times at different temporal offsets, then blend together the results: 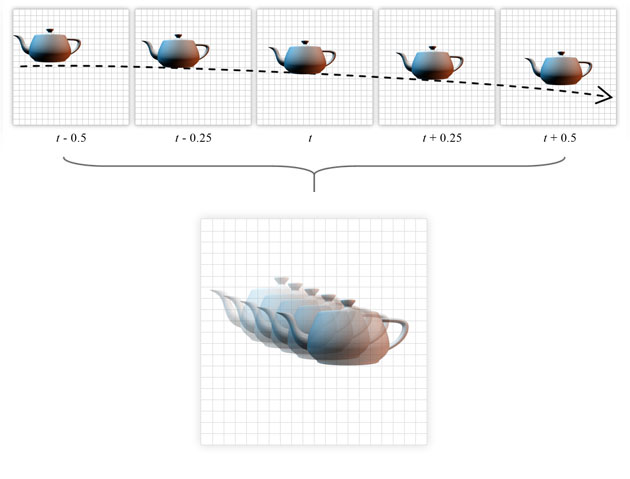 This technique is actually described in the red book (chapter 10). Unfortunately it requires that the basic framerate must be samples * framerate, which is either impossible or impractical for most realtime applications. And don't think about just using the previous samples frames - this will give you trippy trails (and nausea) but definitely not motion blur. So how do we go about doing it quick n' cheap?


Screen space to the rescue!

The idea is simple: each rendered pixel represents a point in the scene at the current frame. If we know where it was in the previous frame, we can apply a blur along a vector between the two points in screen space. This vector represents the size and direction of the motion of that point between the previous frame and the current one, hence we can use it to approximate the motion of a point during the intervening time, directly analogous to a single exposure in the real world.

The crux of this method is calculating a previous screen space position for each pixel. Since we're only going to implement motion blur caused by motion of the camera, this is very simple: each frame, store the camera's model-view-projection matrix so that in the next frame we'll have access to it. Since this is all done on the CPU the details will vary; I'll just assume that you can supply the following to the fragment shader: the previous model-view-projection matrix and the inverse of the current model-view matrix.

In order to compute the blur vector we take the following steps within our fragment shader:
The eagle-eyed reader may have already spotted that this can be optimized, but for now we'll do it long-hand for the purposes of clarity. Here's the fragment program:

So what do we do with this blur vector? We might try stepping for n samples along the vector, starting at previous.xy and ending at vTexcoord. However this produces ugly discontinuities in the effect:

To fix this we can center the blur vector on vTexcoord, thereby blurring across these velocity boundaries:
Here's the rest of the fragment program (uTexInput the texture we're blurring):

While this is physically realistic (higher fps = shorter exposure, lower fps = longer exposure) it might not be aesthetically desirable. This is especially true for variable-framerate games which need to maintain playability as the framerate drops without the entire image becoming a smear. At the other end of the problem, for displays with high refresh rates (or vsync disabled) the blur lengths end up being so short that the result will be pretty much unnoticeable. What we want in these situations is for each frame to look as though it was rendered at a particular framerate (which we'll call the 'target framerate') regardless of the actual framerate.

The solution is to scale blurVec according to the current actual fps; if the framerate goes up we increase the blur length, if it goes down we decrease the blur length. When I say "goes up" or "goes down" I mean "changes relative to the target framerate." This scale factor is easilly calculated:

So if our target fps is 60 but the actual fps is 30, we halve our blur length. Remember that this is not physically realistic - we're fiddling the result in order to compensate for a variable framerate.

The simplest way to improve the performance of this method is to reduce the number of blur samples. I've found it looks okay down to about 8 samples, where 'banding' artifacts start to become apparent.

As I hinted before, computing the blur vector can be streamlined. Notice that, in the first part of the fragment shader, we did two matrix multiplications:
These can be combined into a single transformation by constructing a current-to-previous matrix:

If we do this on the CPU we only have to do a single matrix multiplication per fragment in the shader. Also, this reduces the amount of data we upload to the GPU (always a good thing). The relevant part of the fragment program now looks like this:

Even this limited form of motion blur makes a big improvement to the appearance of a rendered scene; moving around looks generally smoother and more realistic. At lower framerates (~30fps) the effect produces a filmic appearance, hiding some of the temporal aliasing that makes rendering (and stop-motion animation) 'look fake'.

If that wasn't enough, head over to the object motion blur tutorial, otherwise have some links: