A while back I published a tutorial describing a screen space technique for approximating motion blur in realtime. The effect was simplistic; it took into account the movement of a camera through the scene, but not the movement of individual objects in the scene. Here I'm going to describe a technique which addresses both types of motion. But let's begin with a brief recap:

Motion pictures are made up of a series of still images displayed in quick succession. Each image is captured by briefly opening a shutter to expose a piece of film/electronic sensor. If an object in the scene (or the camera itself) moves during this exposure, the result is blurred along the direction of motion, hence motion blur.

The previous tutorial dealt only with motion blur caused by camera movement, which is very simple and cheap to achieve, but ultimately less realistic than 'full' motion blur.

For full motion blur, the approach I'll describe here goes like this: render the velocity at every pixel to a velocity buffer, then subsequently use this to apply a post process directional blur at each pixel to the rendered scene. This isn't the only approach, but it's one of the simplest to implement and has been used effectively in a number of games.

In order to calculate the velocity of a point moving through space we need at least two pieces of information:

Technically the velocity is (a - b) / t however for our purposes we don't need to use t, at least not when writing to the velocity buffer.

Since we'll be applying the blur as a post process in image space, we may as well calculate our velocities in image space. This means that our positions (a and b) should undergo the model-view-projection transformation, perspective divide and then a scale/bias. The result can be used to generate texture coordinates directly, as we'll see.

So at this stage we have a per-pixel, image space velocity incorporating both camera and object motion.

Now we have a snapshot of the per-pixel motion in the scene, as well as the rendered image that we're going to blur. If you're rendering HDR, the blur should (ideally) be done prior to tone mapping. Here are the beginnings of the blur shader:
Pretty straightforward so far. Notice that I generate the texture coordinates inside the fragment shader; you can use a varying, it doesn't make a difference. We will, however, be needing texelSize later on.

The next step is to work out how many samples we're going to take for the blur. Rather than used a fixed number of samples, we can improve performance by adapting the number of samples according to the velocity:
By dividing velocity by texelSize we can get the speed in texels. This needs to be clamped: we want to take at least 1 sample but no more than MAX_SAMPLES.

Now for the actual blur itself:
Note that the sampling is centred around the current texture coordinate. This is in order to reduce the appearance of artefacts cause by discontinuities in the velocity map:

That's it! This is about as basic as it gets for this type of post process motion blur. It works, but it's far from perfect.

I'm going to spend the remainder of the tutorial talking about some issues along with potential solutions, as well as some of the limitations of this class of techniques.

The velocity map contains discontinuities which correspond with the silhouettes of the rendered geometry. These silhouettes transfer directly to the final result and are most noticeable when things are moving fast (i.e. when there's lots of blur). 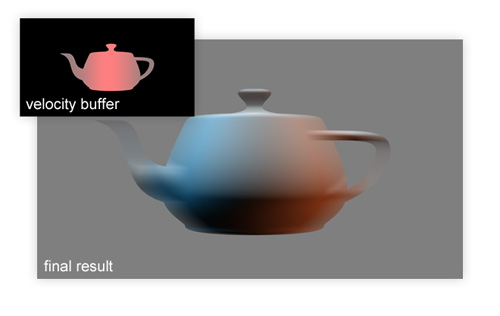 One solution as outlined here is to do away with the velocity map and instead render all of the geometry a second time, stretching the geometry along the direction of motion in order to dilate each object's silhouette for rendering the blur.

Another approach is to perform dilation on the velocity buffer, either in a separate processing step or on the fly when performing the blur. This paper outlines such an approach.

Another problem occurs when a fast moving object is behind a slow moving or stationary object. Colour from the foreground object bleeds into the background: 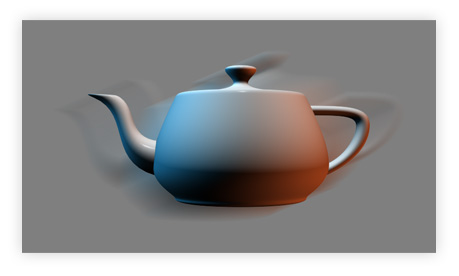 A possible solution is to use the depth buffer, if available, to weight samples based on their relative depth. The weights need to be tweaked such that valid samples are not excluded.

Transparency presents similar difficulties with this technique as with deferred rendering: since the velocity buffer only contains information for the nearest pixels we can't correctly apply a post process blur when pixels at different depths all contribute to the result. In practice this results in 'background' pixels (whatever is visible through the transparent surface) to be blurred (or not blurred) incorrectly.

A correct, but much more expensive approach would be to render and blur each transparent object separately and then recombine with the original image.

It's fairly cheap, it's very simple and it looks pretty good in a broad range of situations. Once you've successfully implemented this, however, I'd recommend stepping up to a more sophisticated approach as described here.