If the output of our display monitors was linear then this would be the end of the story. Alas, this is not the case... 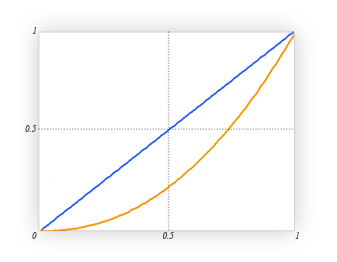 The result of this sag is that any uncorrected linear output from the display will appear much darker than it should. 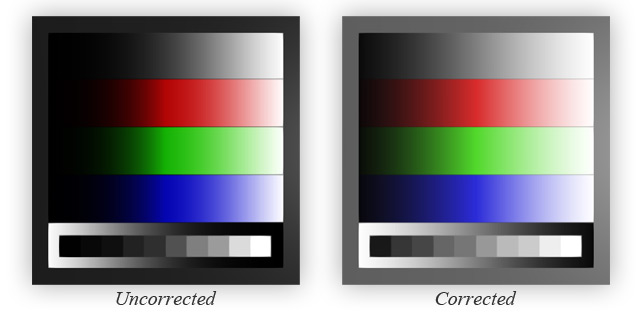 The solution is to 'pre-correct' the output intensity immediately prior to displaying it. Ideally for this we need some information about the response curve of the monitor in use. To this end we could provide a calibration option which allows users to select a gamma correction exponent that 'looks right' for their monitor. Or we could take the easy route and just assume an exponent of 2.2 (which is good enough for the majority of cases). However we choose the exponent, to pre-correct the output we simply raise to the power of 1/exponent (the green line on the graph below). 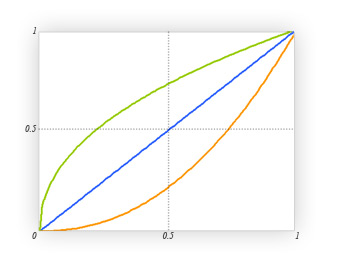 This effectively cancels out the display's response curve to maintain a linear relationship between different intensities in the output. Problem solved. Well, not quite...

It is highly likely that some of the inputs to our linear rendering will be textures and that those textures will have been created from non-linear photographs and/or manipulated to look 'right' on a non-linear monitor. Hence these input textures are themselves non-linear; they are innately 'pre-corrected' for the display which was used to create them. This actually turns out to be a good thing (especially if we're using an 8 bit-per-channel format) as it increases precision at lower intensities to which the human eye is more sensitive.

We can't use these non-linear textures directly as inputs to a linear shading function (e.g. lighting) - the results would simply be incorrect. Instead we need to linearize texels as they are fetched using the same method as above. This can be done manually in a shader or have the graphics driver do it automagically for us by using an sRGB format texture.

For a deferred renderer there is a pitfall which programmers should be aware of. If we linearize a non-linear input texture, then store the linear result in a g-buffer prior to the lighting stage we will lose all of the low-intensity precision benefits of having non-linear data in the first place. The result of this is just horrible - take a look at the low-intensity ends of the gradients in the left image below: 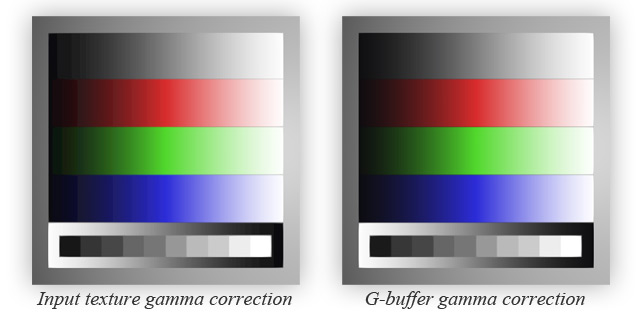 Clearly we need to delay the gamma correction of input textures right up until we need them to be linear. In practice this means writing non-linear texels to the g-buffer, then gamma correcting the g-buffer as it is read at the lighting stage. As before, the driver can do the work for us by using an sRGB format for the appropriate g-buffer targets, or correcting them manually.

What do I mean by 'appropriate'?

Which parts of the g-buffer require this treatment? It depends on the g-buffer organisation, but in general I'd say that any colour information (diffuse albedo/specular colour) should be treated as non-linear; it was probably prepared (pre-corrected) to 'look right' on non-linear display. Any geometric or other non-colour information (normals/material properties) should be treated as linear; they don't encode 'intensity' as colour textures do.

Think of this post as a sort of quick-reference card; for more in-depth information take a look at the following resources:

"The Importance of Being Linear" Larry Gritz/Eugene d'Eon, GPU Gems 3