Lens flare is a photographic artefact, caused by various interactions between a lens and the light passing through it. Although it is an artefact, there are a number of motives for simulating lens flare for use in computer graphics:
For real time lens flares, sprite-based techniques have traditionally been the most common approach. Although sprites produce easily controllable and largely realistic results, they have to be placed explicitly and require occlusion data to be displayed correctly. Here I'll describe a simple and relatively cheap screen space process which produces a "pseudo" lens flare from an input colour buffer. It is not physically based, so errs somewhat from photorealism, but can be used as an addition to (or enhancement of) traditional sprite-based effects.

The approach consists of 4 stages:

Downsampling is key to reducing the cost of subsequent stages. Additionally, we want to select a subset of the brightest pixels in the source image to participate in the lens flare. Using a scale/bias provides a flexible way to achieve this:

Adjusting the scale/bias is the main way to tweak the effect; the best settings will be dependant on the dynamic range of the input as well as how subtle you want the result to look. Because of the approximate nature of this technique, subtle is probably better.

Lens flare features tend to pivot around the image centre. To mimic this, we can just flip the result of the previous stage horizontally/vertically. This is easily done at the feature generation stage by flipping the texture coordinates:
Doing this isn't strictly necessary; the rest of the feature generation works perfectly well with or without it. However, the result of flipping the texture coordinates helps to visually separate the lens flare effect from the source image.

"Ghosts" are the repetitious blobs which mirror bright spots in the input, pivoting around the image centre. The approach I've take to generate these is to get a vector from the current pixel to the centre of the screen, then take a number of samples along this vector. 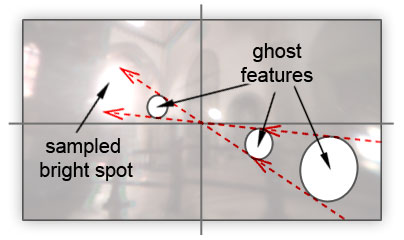 Note that I use fract() to ensure that the texture coordinates wrap around; you could equally use GL_REPEAT as the texture's/sampler's wrap mode. 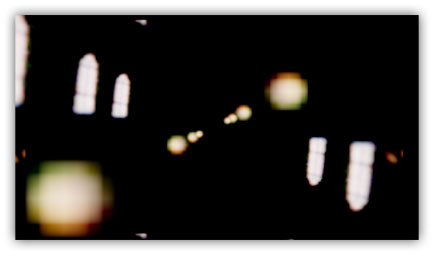 A final improvement can be made by modulating the ghost colour radially according to a 1D texture:

This is applied after the ghost sampling loop so as to affect the final ghost colour:

If we take a vector to the centre of the image, as for the ghost sampling, but fix the vector length, we get a different effect: the source image is radially warped: 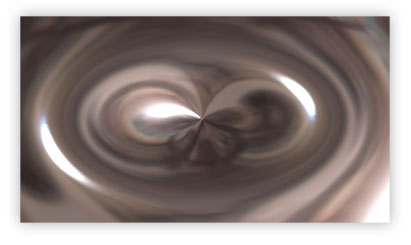 We can use this to produce a "halo", weighting the sample to to restrict the contribution of the warped image to a ring, the radius of which is controlled by uHaloWidth:

Some lens flares exhibit chromatic distortion, caused by the varying refraction of different wavelengths of light. We can simulate this by creating a texture lookup function which fetches the red, green and blue channels separately at slightly different offsets along the sampling vector:

This can be used as a direct replacement for the calls to texture() in the previous listings. I use the following for the direction and distortion parameters:

Although this is simple it does cost 3x as many texture fetches, although they should all be cache-friendly unless you set uDistortion to some huge value.

That's it for feature generation. Here's the result:

I'll not cover how to achieve the blur here; there are plenty of resources on the web.

So now we have our lens flare features, nicely blurred. How do we combine this with the original source image? There are a couple of important considerations to make regarding the overall rendering pipeline:


With this in mind, there are a couple of things we can do at this stage to improve the result:

The first is to modulate the lens flare features by a full-resolution "dirt" texture (as used heavily in Battlefield 3):

As a further enhancement, we can use a starburst texture in addition to the lens dirt:

As a static texture, the starburst doesn't look very good. We can, however, provide a transformation matrix to the shader which allows us to spin/warp it per frame and produce the dynamic effect we want:

The transformation matrix uLensStarMatrix is based on a value derived from the camera's orientation as follows:
There are other ways of obtaining the camrot value; it just needs to change continuously as the camera rotates. The matrix itself is constructed as follows:

The scale and bias matrices are required in order to shift the texture coordinate origin so that we can rotate the starburst around the image centre.

So, that's it! This method demonstrates how a relatively simplistic, image-based post process can produce a decent looking lens flare. It's not quite photorealistic, but when applied subtly can give some lovely results. I've provided a demo implementation. 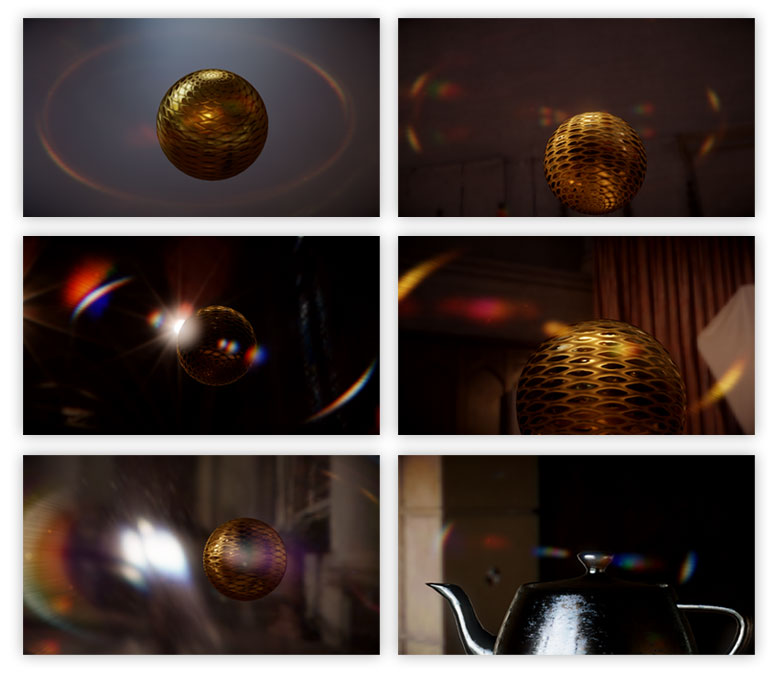